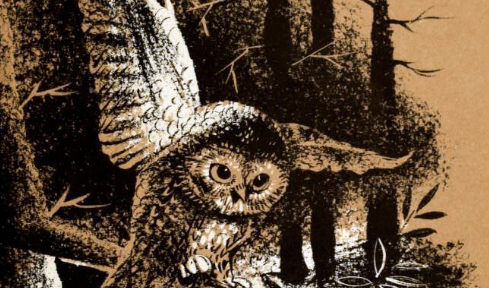 «The Little Island» is a book by Margaret Wise Brown under the pseudonym Golden MacDonald and illustrated by Leonard Weisgard. Released by Doubleday in 1946, it was the recipient of the Caldecott Medal for illustration in 1947. It describes the four seasons as experienced by a little island. The book is lyrically written, an example being: «Winter came/ and the snow fell softly/ like a great quiet secret in the night/ cold and still.». «A little island» in the ocean changes as the seasons comes and go — spring and summer bring flowers, seals, and birds, and days and nights. One day a kitten visits the island with a family on a picnic. This kitten opines that the island is small and isolated; however the island retorts that it, like the kitten, is also a part of the world. When the kitten disputes the island’s claim, the island suggests that it ask any fish. The kitten catches a fish and demands, on pain of being eaten, to know how the island is part of the bigger land. The fish invites the kitten down into the water to see, which the kitten of course cannot do. The kitten demands to be shown another way. ‘Then you will have to take it on faith’, says the fish — ‘to believe what I tell you about what you don’t know.»The fish then tells him «how all lands are one land under the sea.» The cat realizes he has learned a great secret, which he loves, and lets the fish go before leaving the island. The island settles back into the timeless cycle of the seasons — autumn, winter, storms and calm.